The post is very important to me, and it is likely to upset some people. Those involved will not admit their guilt, will deny every aspect of what I am about to say, and place the blame elsewhere.

There is a silent killer in the dog training world. It is not a virus, not a piece of equipment, not a bacteria.

It is an idea.

It is the idea that all dogs, in all situations, should be trained with nothing other than rewards, and without ever the use of aversives. “Reward what you like and ignore what you don’t” is the mantra that is preached, and all will be well in the world. In the dog training community this philosophy goes by many names, some call it Pure Positive (which is not an accurate description), some call it Progressive Reinforcement, some call it Reward only, but for the purposes of this article I will refer to it as Aversive Free or AF

*Aversive Free (AF) Training can be defined as training which involves only the R+ and P- quadrants of learning. When I refer to Aversive Free (AF) Trainers in this article, I am not referring to those who simply choose this approach for themselves, but I am referring to those who vehemently oppose the use of aversives for any dog in any situation.

Let me be clear, what I am referring to is not the idea that reward only techniques are good, and work in some cases. What I am referring to is the dogmatic belief that this is the ONLY way to train a dog, or deal with behavior problems. The aversive free philosophy is that any type of consequence other than simply removing the reward, is cruel, inhumane, and barbaric.

I want to avoid going into a dissertation on learning theory here, but let me also be clear: If you think rationally, and apply simple logic, it becomes clear that this approach to training dogs will have significant limitations. ‘Contrary to their claims, a aversive free (my edit to terminology) training approach is not as effective and takes considerably longer to reach any level of reliability even close to what a balanced approach can produce. In some instances, reliability cannot be realized using a positive only approach and some dogs will not be trainable at all until appropriate corrections are included.’ (Quoted from Roger Hild.)

“Well,” you might be asking at this point. “What does this have to do with death and killing.”

Quite a bit in fact. You see, rewards are used primarily to create new behavior and offer little to no assistance in communicating to a dog that a certain behavior is unacceptable. However, millions of dogs are killed in this country every year because of behaviors that are deemed “unacceptable.”  The AF fanatics have made such a roar that the majority of shelters and rescues have adopted an aversive free philosophy within their organizations. Why? Well probably a few reasons. For one, it sounds great on paper to say that you only reward dogs, and never punish with aversives. Secondly, they have drank the kool-aid. The aversive free proponents have created such a buzz, and are so good at promoting their philosophy that they have many people believing that anything can be accomplished with reward based techniques, and that corrections are always bad and will ruin your dog forever.

Yep, shelter staff, daycare owners, breeders, veterinarians, and many others (most of whom have only trained a handful, if any dogs in their life. And likely have never worked a dog, hands on, through a serious aggression problem.) have been duped into believing this non-sense.

Many well meaning dog owners have also been sucked in, believing that, armed with cookies, hugs, and rays of sunshine they can transform their aggressive, unruly pooch into a well mannered pet.

It’s an easy argument to sell. After all, rewarding dogs is fun, and correcting is not. So when people are told by a professional that they never have to correct their dog again, they are all ears.

Unfortunately, most dogs with serious behavior issues will not be helped with this approach.

And then come the excuses, “This dog needs medication,” “He was traumatized too much as a puppy and will never recover,” or the classic “It’s not the dog, it’s the owner.” the list goes on and on.

When the AF approach fails, the only other option is euthanasia. After all, it would be unheard of to just give a dog a simple correction, to help it understand that there are certain behaviors in life that have consequences. Simple, immediate, consequences. 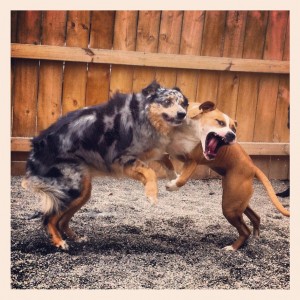 Luna the Aussie has a history of biting eight people and dogs, Georgia has attacked several dogs, now they are rough housing together without a problem.

Use a leash and prong collar to create momentary discomfort. . . .Oh no, anything but that. Death is certainly a better option.

I am a member of many online dog forums, one of which used to be over-run by the AF cult. (For more on the ‘cult’ of aversive free see here). One woman had a young dog who she was having some trouble with. Even though she was using the aversive free techniques that supposedly can fix any problem, she was continuing to struggle with her dog. Several people on the forum advised her that she should try a prong collar to correct her dogs behavior. “No way,” she said, “I’d sooner put him to sleep than do that.”

Well folks, guess what wound up happening to that unruly pup? That’s right, euthanasia.  (Murder if you ask me.)

Needless to say, she was subsequently kicked off the forum, and other members stopped listening to the AF nonsense.

More recently, I was brought a foster dog by a rescue volunteer. The dog had been showing some fear aggression and no one had been successful in making any progress in the months that he had been with the rescue. The volunteer had been a client of mine with her own dogs, and seen success with similar issues, she had also been to the AF trainers that the rescue recommends, and seen no success. The rescue coordinator had already made it very clear that this dog was “running out of time.” (That means either he will be euthanized, or dumped on another rescue.) Several of the rescue’s volunteers had pleaded with the coordinator to let them bring the dog to me, because it is well known that I have a very high success rate working with aggression cases (additionally, I was offering my help for free, and told the rescue that I did not need any credit nor did they need to tell anyone that I helped). “Out of the question,” they were told. Simply because I apply a Balanced Training Philosophy. In other words I apply both reward and consequence (beyond the removal of reward) to help create understanding. Yep, the rescue would rather give up on the dog, than send it to a trainer who doesn’t conform to their religion. Then, in subsequent emails, they blamed the volunteers. The very people who reached out to help this guy, took the blame for his failure. Over 50% of these dogs have histories of aggression to people and dogs. By enforcing rules and leadership, every one can be together peacefully. (At our Pack Socialization Class)

The other unfortunate thing is that these “trainers” who claim to be so positive with dogs, are often not so positive with people. The same trainer who yesterday recommended euthanasia to a dog, today will publicly bash me and call me cruel and inhumane for rehabilitating the same dog, all because I gave a small correction. I save the dogs life, but I’m the cruel one! Myself and thousands of other Balanced trainers have had to deal with name calling, accusations, slander and defamation by the AF. I even had another local trainer say to a client of mine “I recommend euthanasia for him, but whatever you do, don’t go to K9 Connection.”

As a close friend of mine has said, “The Aversive Free mantra should be ‘Death Before Discomfort!'” The Black dog in the back had been told by other trainers that he should be euthanized due to dog aggression. After ONE correction, he is able to exist happily.

Of course if you talk to any Aversive Free trainer, they will never admit this. Why would they? It would put an end to their reign of terror.

Even in the situations were an AF only approach can work, it often takes a very long time. and time is something that many shelter dogs just don’t have. If they don’t show quick improvement, then off to the chopping block they go.

This is the reality for hundreds of thousands of dogs in this country.

Let me say that a bit more clearly: Aversive Free dog training is responsible for the deaths of hundreds of thousands of dogs every year.

I am tired of this issue being pushed under the rug. I am tired of clients coming to me in tears after being told by positive dog trainers that their beloved pet could never be helped. And I am sickened to think about the numbers of innocent dog owners who actually took their advice.

Gracie the Pit Bull would have died in the shelter if a volunteer hadn’t pulled her out and brought her to me.

Again, I must restate. I have nothing against positive, rewards based dog training (I myself use positive dog training every day, it is a necessary component of a balanced approach), or those who choose the positive approach for themselves. It is the dogmatically Aversive Free mentality that I am speaking against. Those who force this philosophy on everyone around them, believe that it is the only way, and bash other techniques.

We need to wake up and realize that there is a balance. Using corrections does not mean you must cause pain, fear, and intimidation. Aversive free training has a place in the dog training world, but it is not the only place.  We need to return to open-mindedness in dog training. After all, lives are at stake.

Please read the articles linked at the bottom of this post, and if you love dogs, share this article. It is time for a change.

Video of me introducing a prong collar to a foster dog. (If anyone can call this abuse, I’d be shocked.)

Plan B – Kill The Dog by Roger Hild

Last but not least, A Great Article by the very provocative Terrierman Patrick Burns.